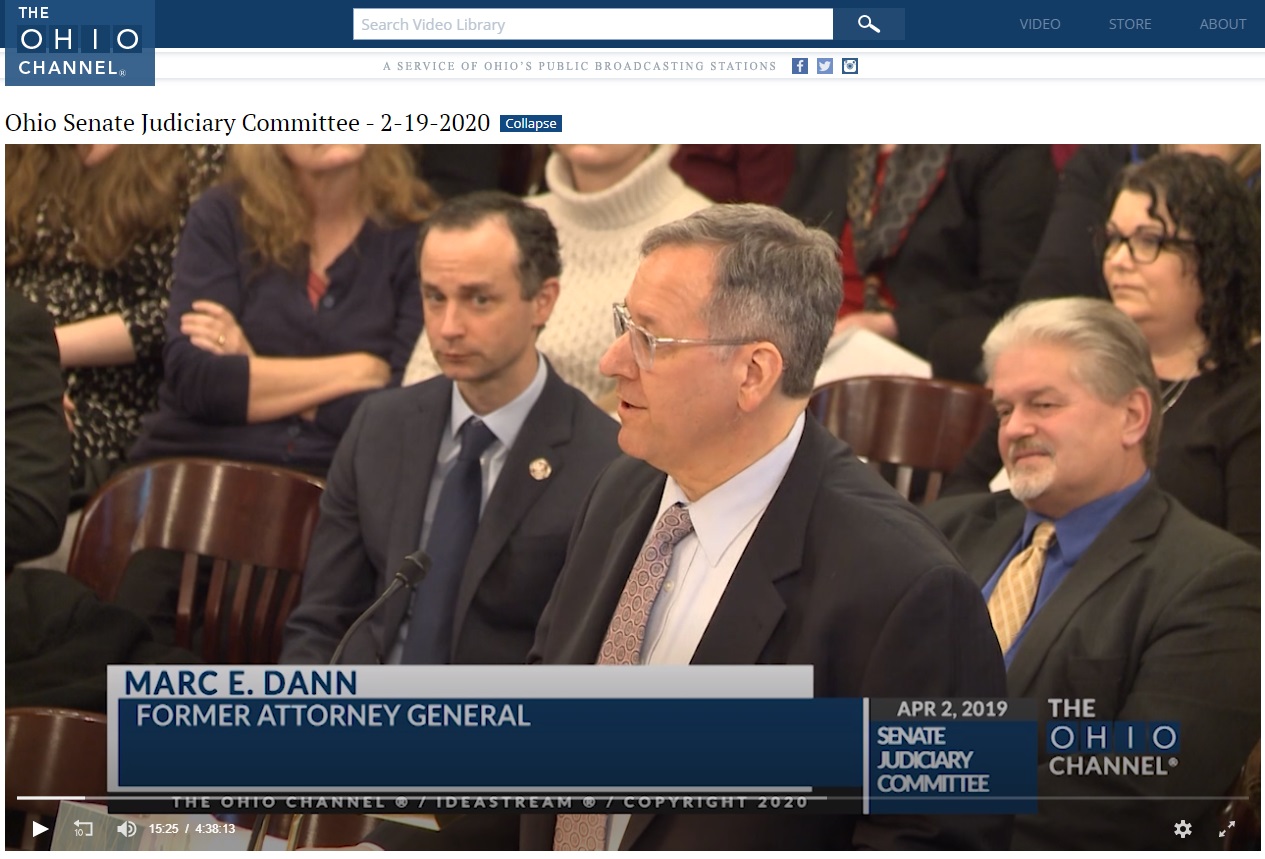 I have dedicated my entire legal career to helping people who have been hurt, scammed, cheated, or victimized seek and secure justice. I’m proud to say I’ve done just that at my first small law firm, as an Ohio State Senator, Ohio Attorney General, and now as the founder of DannLaw. That’s why I seized the opportunity to urge the members of the Ohio Senate Judiciary Committee to first strengthen and then pass SB 162 which would eliminate the criminal and civil statutes of limitation for rape and sexual assault.

The changes called for in the bill are both much-needed and long overdue. I’m pleased to share my testimony with all of you and to urge you to contact your state legislators and ask them to support this important measure. You may also watch my presentation to the Committee on the Ohio Channel.

Good morning, Chairman Eklund, Ranking Member Thomas and members of the Committee. I am here today to express my support for Senate Bill 162 which would eliminate criminal and civil statutes of limitations for rape. I want to thank my State Senator Nikki Antonio and Senator O’Brien who represents the district I once held for continuing the work I and colleagues of both parties began in this very room in 2005. Passage of this much-needed and long-overdue legislation would represent a monumental step toward securing justice for victims and imposing justice upon those who have escaped punishment and evaded accountability for their monstrous acts simply because they have managed to run out the statutory clock.

I first learned about the terrible physical and psychological pain victims endure when I led the effort to pass Senate Bill 17 while serving as the Ranking Member of the Senate Civil Justice Committee. After listening to the harrowing and heart-wrenching testimony of women and men who had been sexually abused as children, both the Committee and the Senate unanimously passed the bill which included a provision that extended the civil SOL for sexual assault to 17 years.

Unfortunately, in one of the ugliest and most destructive displays of the negative impact big-money donors can exert in the state’s pervasive “pay-to-play” culture, the nation’s multi-billion-dollar insurance companies placed the pursuit of profits ahead of the interests of victims and succeeded in stripping the civil SOL extension from SB 17 when it reached the House.

I learned even more about the grave challenges victims of sexual assault endure while serving as Ohio’s attorney general. I, like everyone who has had the privilege of serving in that position, devoted much of my time to ensuring that law enforcement had the resources needed to pursue, prosecute, and incarcerate offenders. Although I’m proud of all that I, my staff, and the AGs who preceded and succeeded me have done to ensure that offenders are prosecuted and incarcerated, anyone who truly cares about victims knows we must do more than throw their rapists in jail. We must provide them with the opportunity to seek just compensation for the severe physical and psychological injuries most will suffer for as long as they live.

I applaud Senators Antonio and O’Brien and co-sponsors Craig, Fedor, Kunze, Lehner, Maharath, Sykes, Thomas, Williams, Yuko for opening the courthouse door that was slammed shut in the faces of thousands of victims in 2005.

But today, 14 years after SB 17 was eviscerated by the insurance industry, we need to do more than lift the civil SOL applicable to offenders. That’s because sexual predators like Larry Nassar, Jerry Sandusky, Richard Strauss, Jeffrey Epstein, abusive priests, and others are judgment-proof due to the fact that they are broke, dead, or both.

But institutions like the Catholic Church, U.S.A. Gymnastics, Penn State, Michigan State, and the Ohio State University along with the powerful officials who looked the other way as monsters under their control abused innocent victims can and should be held accountable. To my point, Rep. Brett Hillyer of Uhrichsville recently introduced House Bill 249 which will allow the more than 170 people abused by Richard Strauss to sue OSU. Rep. Hillyer is on the right track, but he’s not going far enough. Every victim in the state should be afforded the opportunity to seek and secure justice.

This Committee could and should provide that opportunity by amending this bill to include the elimination of the civil SOL that now protects institutions and officials who knew or should have known what was occurring on their watch.

Thank you again, Chairman Eklund, Ranking Member Thomas and members of the Committee for allowing me to appear before you today. I would be pleased and eager to answer any questions you may have.